Qatar scores a goal against AIDS 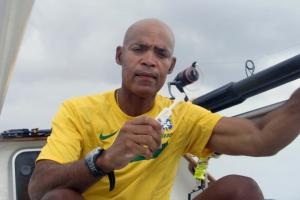 [File photo] Don Victor Mooney encourages voluntary HIV testing aboard the Spirit of Malabo. Mooney hopes to cross the Atlantic Ocean in honor of his brother who died of AIDS in 1983, passed the halfway mark, Sunday, May 11, 2014. [AP/GC Media]

Stigma against AIDS gets the red card at 2022 World Cup”
— Don Victor Mooney
NEW YORK CITY, NEW YORK, UNITED STATES, November 25, 2022 /EINPresswire.com/ -- Don Victor Mooney of Queens, the first African American to row across the Atlantic Ocean recognizes the State of Qatar leading institutions for their commitment to fight against HIV/AIDS and unprecedented global partnerships that has catapulted the tiny country as a center in the Middle East for medical research, care and culture.

On his 4th try, Mooney completed a 21-month solo transatlantic row from Maspalomas, Las Palmas (Canary Islands), an archipelago located off the coast of West Africa to New York’s Brooklyn Bridge in memory of his brother who died of AIDS and to encourage voluntary HIV testing.

Mooney had some help along the way.

Before his retirement, Coca-Cola’s, Executive Vice President, and Chief Administrative Officer, Mr. Alexander B. Cummings fueled the rower with some refreshing beverages.

In 2019, as President of H.R. 1242 Resilience Project, Mooney made his inaugural visit to Qatar where he commemorated the 400 Years of African American History at the 379th Air Expeditionary Wing at Al Udeid Air Base under the theme: 400 Years – Faith, Resilience, Healing + Partnership.

Don Victor Mooney was received at Qatar Ministry of Foreign Affairs/ Protocol Department where he delivered a letter and a memento for His Highness Sheikh Tamim Bin Hamad Al-Thani, Amir of State of Qatar.

For World AIDS Day, December 1, 2021, Mooney was invited to the Vatican with his family where he presented Pope Francis a uniform worn on his first rowing attempt from Goree Island, Senegal to New York after the general audience.

The State of Qatar is the host country for 2022 World Cup, a first for the Arab world, with its population of more than 440 million people.

For inquiries or corrections to Press Releases, please reach out to EIN Presswire.
✕
× Close Ad